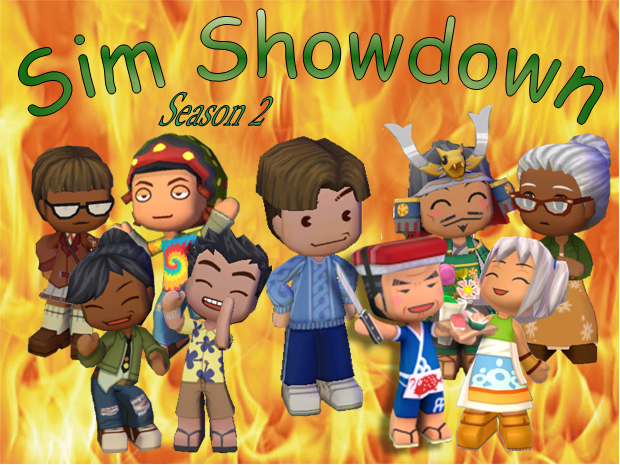 The second season airs this time consisting of 24 contestants all battling it out for the one million simoleons. So, what fights will break out, what friendships will be made, what tactics will be used and who is going to win, the second series of Sim Showdown. To see other episodes, view the Archive. Click there to see the talk page.

Matt: Hello and welcome back to another episode of Sim Showdown! Last time, we concluded the chaotic triathlon. We have another exciting episode lined up so I'll stop babbling and let's go!

'*in the female elder cabin*

Abigail: We've really got a good advantage on the other team haven't we?

Alexa: These statistics suggest something ...

Ruthie: They do dearie?

Alexa: We have a stable advantage of 60% to 40% that we could now use beneficially to elimate their strongest team members which is both beneficial to us in the short and long term.

We would do this by making them fail multiple tim-

Nova: Um, I wouldn't do that. Experience hon.

Petal: It could work though ...

Margaret: I'm not sure

Alexa: We may not have age on our side, but we certainly have intelligence!

Matt: *on megaphone* Contestants! You have to 20 minutes to get ready and get on the bus. We're travelling to the opposite side of the island for today's challenge!

'*camera flashes to the bus travelling briefly, the jumps to it arriving at it's destination*

Matt: So welcome to the island's farm everybody!

Renee: *walks out of Barn* Hey guys! Are you all pumped for today's challenge?

Most of the contestants: *simply nod*

Matt: So today's challenge is revolved around-

Matt: Yeah ... that. So your task is to round the pig into the pen in the quickest time you can! You'll each take it in turns and whoever has the fastest time will have won the team safety from tonight's elimination. Are we ready? Then let's go!

Alexa: Statistically, I would say that I'm very close to-

'*pig suddenly vears off to the side, now heading away from the pen*

Alexa: *stops to catch her breath* Thanks Ruthie. *glances at the pen* Hang on ... *walks towards the pen* Ah-ha!

Alexa: *picks up bag of food, sprinkles some just inside the pen entrance*

Pig: *stops, turns, and runs towards the food*

Matt: This should not be happening!

Renee: Whoopsie, I forgot to remove the food

Matt: Someone remove the pig food! It cannot be this easy for them!

Nova: Matthew, I thought that you'd continue with the good moraled show I'd set up in your absence ...

Alexa: The pig is statistically all in the pen now.

Alexa: You need to exclude you argueing which would approximate to -30 seconds.

Alexa: But that will not provide a fair set of results.

Matt: Oh well. Next up is Summer!

Summer: Give me a P!

Summer: Give me a I!

Summer: Give me a G!

Summer: Give me a G!

Summer: Give me a Y!

Summer: What do you get?

Matt: We'll just give you a 'Did Not Finish'.

Star: HIYYY-YA! *jumps, doing a ninja's forward flip, landing in a crouching position before chasing after the pig at a really fast speed*

Edwin: Man, that was so close!

Star: *leaps again, this time she grabs the pig*

Abigail: Oh hell no! Don't you dare ignore me!

Abigail: That's better, now get in the pen before I whoop yo' ass into some bacon!

Pig: *scrambles to get in the pen*

Renee: Was that animal abuse? I'm pretty sure it was ...

Petal: Let's do this.

Petal: *chants something in elvish*

Renee: You people are crazy ...

Petal: Let us walk there united.

Pig: *trots over to Petal and they walk into the pen together*

Renee: I totes have to join this show!

Matt: Anyhow, Petal wins the challenge for the Elders!

Matt: Back to the camp!

'*camera goes to the teens voting*

Matt: The people through are ...

'*camera jumps to the votes*

Amelia: Bean, he's really getting to me now ...

Billy: Summer, she did nothhing.

Summer: Bean, his time was terrible!

Matt: Correct, Summer, you're out!

Summer: Oh well. Can I do a cheer to say good-

Matt: No. Well that's the end of the episode, we'll see you next time on Sim Showdown!

= The contestant was placed on the Elders Team

= The contestant was placed on the Teens Team

= The contestant came first, and won this season of Sim Showdown

= The contestant was on the team that won the challenge, and was completely safe from eliminations

= The contestant had one or more votes against them, however they did not go home

= The contestant was voted out of the competition

= The contestant was out for those weeks, however, returns later in the competition

= The contestant quit the competition

Retrieved from "https://mysims.fandom.com/wiki/User:Potterfan1997/Sim_Showdown?oldid=595531"
Community content is available under CC-BY-SA unless otherwise noted.