Roxie Road is a girl who loves ice cream, is a neat freak, and cares for her cows Annabelle, Clarabelle, and Tuffy. She also seems to have a thing for bees as she wears outfits that resembles a bee. The color scheme of her outfits usually include the colors yellow and black/brown, stripes similar to those of a bee, and an antennae. According to her, she's dressed up as a bee because she uses honey from bees in her ice cream. Roxie Road is also obsessive-compulsive with being clean and cleaning! She can be found wiping away the counters of her ice cream shop or sweeping the dust (though she doesn't get very far...) in dusty Cowboy Junction. She also hosts a minigame where players must serve ice cream according to the customers' orders. She also works as a chemical scientist for your Headquarters.

Roxie's appearance is similar to that of a bee. Her hair is black, with yellow antennaes on top of her head. Her skin is dark, she has a high pitched voice, her eyes are brown ovals with eyelashes, and she has a mouth similar to Poppy's and DJ Candy "Supergroove"'s. Roxie wears a black and yellow striped shirt with straps, along with wings on the back. She wears what appears to be khaki pants, along with black shoes.

Roxie with Poppy outside the Ice Cream Shoppe.

The interior of Roxie's Shop. 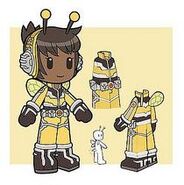 The MySims Standup item featuring Roxie in The Sims 2: FreeTime.
Add a photo to this gallery

Retrieved from "https://mysims.fandom.com/wiki/Roxie_Road?oldid=663847"
Community content is available under CC-BY-SA unless otherwise noted.