Lyndsay is an extremely adventurous, intelligent, curious, and somewhat hyper explorer. She goes a bit nuts whenever she sees a new map, and has very good knowledge of world trivia. 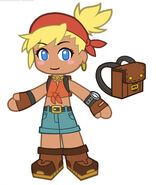 Lyndsay's trophy in The Sims 4.
Français
Community content is available under CC-BY-SA unless otherwise noted.