Dr. F is a mad scientist who graduated from Mad Scientist College with wacky inventions, and (sometimes dangerous) experiments. He's crazy, silly, and seemingly harmful, but make sure to be careful when you're around him! He'll often shout out silly phrases, such as "TODAY'S WEATHER CALLS FOR A 100% CHANCE FOR SCIENCE!!!" As crazy he can be, he's actually very smart and entertaining. Dr. F dresses in a white lab coat with a red bow tie (changes colors if you wear his outfit in MySims Party), and wears round glasses. He has brown eyes, wild white hair, and wears red rubber gloves and boots. He runs several laboratories in your town, on Rocket Reef, in the Industrial District (temporarily), in the town that hosts festivals, in Speedville, and the City. 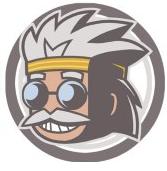 Dr. F's trophy in The Sims 4.
Add a photo to this gallery
Retrieved from "https://mysims.fandom.com/wiki/Dr._F?oldid=663158"
Community content is available under CC-BY-SA unless otherwise noted.